Today we are going to talk about an exciting new feature that we have recently released on angr’s master: Symbion, a brand new exploration technique aimed to overcome some of the complexities that real-world programs exhibit and that can’t or are not currently modeled in our symbolic engine.

Before moving on the interesting details remember: if you use Symbion in your research please cite the paper! :D

When we leverage a symbolic execution tool such as angr to analyze a program, we depend on a model of the operating system and libraries to make the analysis tractable ( in fact trying to symbolically execute everything would lead immediately to a state explosion). However, there are a lot of libraries and system calls out there, and we cannot hope to model them all. In the case that a program requires an unmodeled procedure, we generally either lose precision, encounter state explosion or spend a lot of time developing a SimProcedure. For real-world programs, this can become a huge barrier to a useful analysis.

Instead of modeling, Symbion levereges a concrete execution of a program to support the symbolic analysis.

Analysts may wish to symbolically reason about control flow of a program between two program points B and C, but can’t even execute from point A to point B due to unmodeled behaviors. With Symbion, they can execute concretely up to point B, switch into angr’s symbolic context, and compute the program input needed to reach point C. The solution obtained by angr can then be written into the program’s memory and by resuming the concrete execution reaching beyond point C. 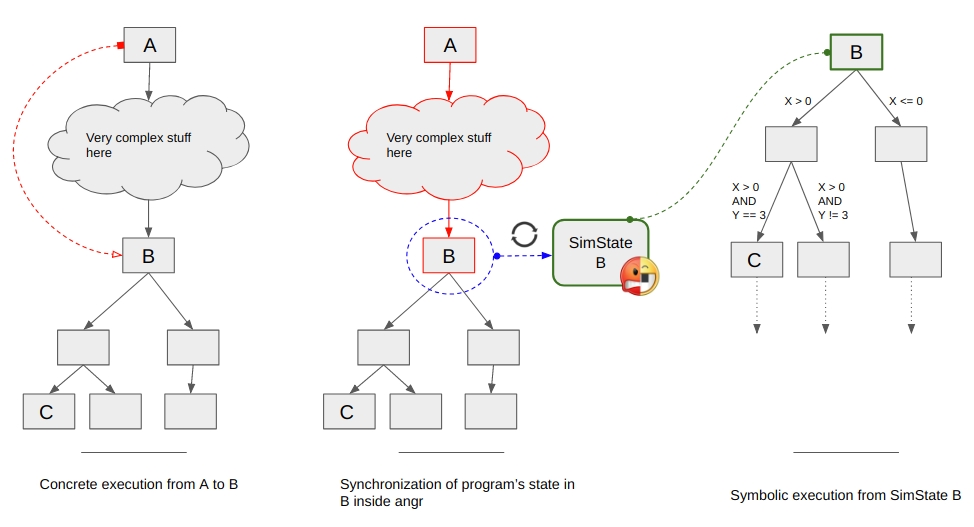 In academia, previous works have explored similar ideas with projects like Mayhem, AVATAR and S2E. We leverege some of the interesting ideas implemented in these projects with the aim of making a hybrid concrete/symbolic approach that is easy to use and flexible enough to build upon.

Our main design goals are:

With these goals in mind, we have worked to create Symbion, while minimizing the changes to the overall angr environment and workflow.

The first thing we need to do when performing an analysis is creating the concrete environment we wish to use. Symbion adds the notion of a ConcreteTarget, a generic abstraction for any execution environment that defines simple memory, register, and execution control interactions.

For example, to connect to a gdbserver:

While here we use a GDB concrete target, it is totally possible to implement new targets ( like full-system emulators, hardware via an attached debugger, a Windows debugger,… ) by implementing a very simple interface:

The attentive reader may notice that this API bears a striking similarity to the interface used by the AVATAR target-orchestration framework; this is intentional, and we inherit target code and capabilities from AVATAR’s collection of pluggable targets.

Next, we need to create the angr environment. This is done in the usual way, but specifying that a ConcreteTarget is to be used:

The primary user-facing component of Symbion is its ExplorationTechnique, which works similarly to the other available techniques. This allows us to execute the program until a certain address is reached, or any number of other conditions.

Translating this idea into the script, let’s say we want to reach 0x4007a4:

While this seems simple, a lot of the complexity of Symbion is hidden in the transition between the concrete and the symbolic contexts. The whole magic occurs through a new angr execution engine (SimEngineConcrete) and an accompanying Concrete state plugin ( these are complex enough to warrant their own blog post and will be discussed later ). For now, it suffices to say that at the end of its execution (when we have reached the target address), the SimEngineConcrete returns a SimState reflecting the current state of the concrete target.

However, this synchronization does not need to copy any memory; during the synchronization with the concrete target, we modify the state’s memory backend such that reads are lazily redirected to the underlying concrete memory. 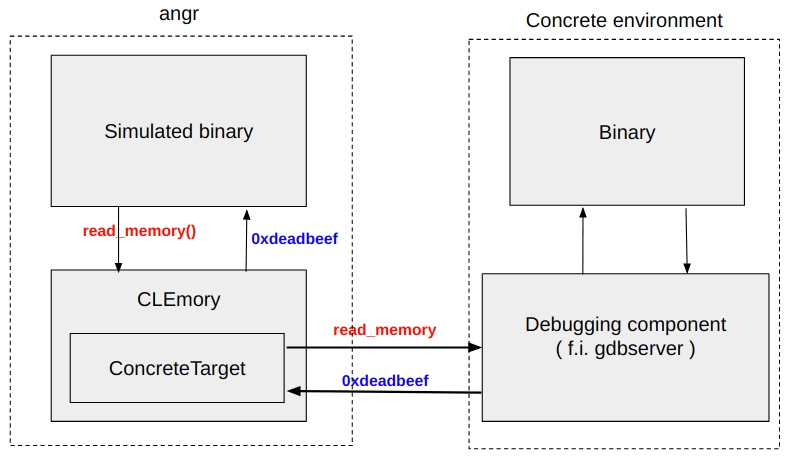 We are again free to perform any analysis we wish. Note that while this state forwards memory reads to the underlying concrete target, writes are not forwarded, and will remain only in this symbolic state, until they are concretized and applied to the target. Concretization is triggered by the use of the concretize argument passed to Symbion. We only need to supply a list of addresses, and the variable we wish to solve for.

For this example, we are going to use a homemade toy binary (a 64-bit Linux ELF) that will make decisions about the execution based on an internal hardcoded configuration. The binary has also been packed with UPX in order to hinder as much as possible the analysis with angr.

Disclaimer: this homemade “malware” is definitely not a real-world case scenario, but its level of complexity is perfectly suited for showing how Symbion works. We are planning to show you real-world cases in future blog posts!

Before starting make sure you cloned the angr-targets and you installed it in your python virtualenv.

First thing first, let’s get familiar with our binary. You can get a [copy](https://github.com/angr/binaries.git in tests/x86_64/packed_elf64) from the angr binaries repository

By executing it, you have a surprise:

Seems that we have an evasive behavior here! We leave the reversing of the binary and the discovering of its original entry point (OEP) as an exercise to the reader, but for the sake of our example, we’ll spoil it: 0x400b95. We then execute the binary until we reach the OEP, using the procedure outlined above, and construct the control-flow graph of the unpacked binary. By looking at the CFG at the OEP we can easily see 4 possible behaviors of the binary:

Malware CFG and its behaviors:

Now, as analysts, our job here is to study this binary’s malicious behavior, and how it is triggered. We see some nasty secondary payload dropped starting in the basic block at 0x400d6a; how do we get there? And what about the basic block 0x400d99? Well, this is what symbolic execution is good for!

The idea is to let the binary unpack itself and reach concretely the position where the first decision is taken ( the address 0x400cd6 ), synchronize the state inside angr, define as symbolic the configuration buffer, explore symbolically and resume the program as we whish given the solution provided by angr!

However, this binary is packed, and the memory there will be overwritten by the unpacking process. Software breakpoints, like the ones used by GDB, will be overwritten as well. Instead, we manually reverse-engineer the binary and determine that we can execute from the beginning of the program until 0x85b853 to have a new stub available at 0x45b97f and eventually wait for 4 breakpoint hits to this address to have our unpacked code at 0x400cd6.

Let’s put this into code!

Now the new_concrete_state is synchronized with the program’s state at 0x400cd6. To start to explore symbolically the program we should declare as symbolic the portion of memory that hosts the hardcoded configuration used by the malware. We have identified this previously at the address resolved by the operation rbp-0xc0.

Address of the hardcoded configuration:

Let’s leverage this info to declare such portion of memory symbolic!

Time for some symbolic execution to find the value of the configuration to trigger the dropper behavior of this toy sample. ( for the sake of clarity let’s use tag instead of raw addresses ) Also, we are going to instruct angr to specifically avoid, during the symbolic exploration, part of the binary that are related to evasion or behaviors that not interesting for this analysis.

Last step: now that we hold the value of the configuration to trigger that action in the binary, let’s concretize it in the memory of the concrete execution and let’s enjoy the triggering of our chosen behavior!

The Symbion ExplorationTechnique supports the addition of a timeout to the concrete execution; this come handful in cases where you don’t hit one of the expected breakpoints and the program keeps running or if hitting one of the breakpoints take a while and you want to be sure that you didn’t miss your shot. In these cases, after an user defined value for the timeout, we stop the concrete execution ( warning: the ConcreteTarget implementation must implement the stop method properly ) and angr returns the synchronized state in the timeout stash.

At this point by investigating the returned state, users can decide to resume the execution again and wait longer or just aborting the analysis or do whatever they want!

If you’ve decided to use SimProcedures during the declaration of the angr’s Project:

The Concrete state plugin tries to update their addresses in the angr’s internal SimProcedures table ( i.e. p._sim_procedures ) in order to avoid to execute libraries code that can sometimes get the VEX engine in troubles ( e.g. dirty calls not implemented ) or lead to a early state explosion.

The current version of Symbion is a very basic implementation of the interesting concept of mixing concrete and symbolic execution to support analysis of very complex target. We have plenty of exciting ideas to push this project:

The presented example showed how we leverage Symbion to discover the malware configuration that eventually trigger a specific action of interest in the binary. We accomplished that by strategically skipping the initial phase of malware unpacking delegating its execution to the concrete environment, then we synchronized the state of the unpacked program inside angr and by declaring part of memory symbolic and levereging symbolic execution we discover the correct value to avoid the malware evasion and trigger the dropping of the second stage.

The flexibility of the designed interface should open the door to different implementations of ConcreteTargets and the building of new tools that will let analysts to combine these concrete and symbolic analyses in new and exciting ways.

We think that this new primitive will let us explore new execution method of very complex target and give space to new ideas regarding the exploitation of symbolic execution for real world programs. We are excited to release this to the community, to see how you all will use angr to push the boundaries of program analysis even further.

Stay tuned for more example and updates about the project!